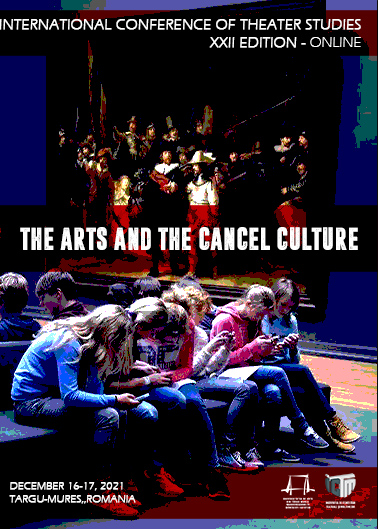 THE ARTS AND CANCEL CULTURE

Born out of the desire to erase the injustices of the past or the speeches / gestures of the present, the culture of cancellation ("cancel culture") seems to give rise to the most heated disputes. Whether we are talking about human rights defenders, women, people of color or sexual minorities, the positions have proved to be sharp and sometimes irreconcilable. Leading to the annulment of a person, a creation or an entire social group, the cancel culture has found its levers of action in the virtual environment, especially in social networks. Cancel culture was further joined by media groups, but also companies or corporations attentive to a phenomenon that can no longer be neglected by anyone today. Culture and the arts in general have not remained immune from the impact of actions and claims of social justice, a justice that is done today outside the legally constituted courts, with a social impact that goes far beyond the verdict of the courts. Removing (in other words, canceling) world-famous people of culture, writers or academics from the public space, for remarks considered offensive to other people (usually those who are in the category of minorities) has kept the first page of newspapers and the attention of television channels. Borrowed through distortion from the world of performance - to cancel a show - the culture of cancellation brings together the most diverse, ideological and, equally, ontological meanings, becoming a true social practice. The questions to which our conference seeks answers are:

• Is there a history of the culture of annulment or is it a “product” of the post-truth society?
• In the face of the culture of annulment, do the arts respond to the imperatives of human solidarity or are they part of an isolation process?
• What are the aesthetic and artistic consequences of the cancel culture?
• What are the limits of freedom of expression for those who invoke the "injustices" of the cancel culture defenders?
• Is there a right to defend those accused of "uttering" words (phrases) or creations that are considered harmful to others’ rights or image?

Academics, students, artists, researchers, anthropologists, all those who think they can enter into a dialogue in relation to the proposed topic are invited to take part in the conference. We invite you to send the abstracts of the contribution (maximum 400 words) in Romanian, Hungarian, English or French, together with the institutional affiliation of the authors, by e-mail (in Microsoft Word compatible format), to Sorin Crișan, email: si_crisan@yahoo.com and Balási András, email: balasi.andras1@gmail.com until December 3, 2021.

The conference will be held online, in sections, in Romanian, Hungarian, English and French. The Scientific Commission will select the papers that will participate in the conference before December 10, 2021. The papers accepted through the peer-review system will be published in the Symbolon journal (academic publication of theatre and cultural studies of the University of Arts Târgu Mureș), indexed in international databases.