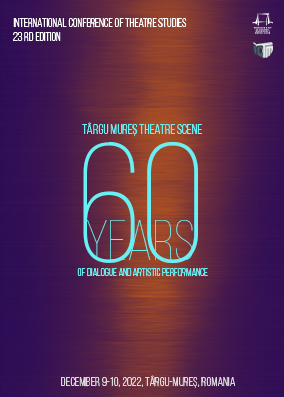 Art is unique and local. This statement by Karl Ove Knausgård shows, on the one hand, the exceptional, incomparable character of every artistic gesture. On the other hand, the quoted words also speak about the particular, the characteristic of the space in which a certain artistic vibration is born. The year 1962 has a special significance for the Târgu Mureș theatre scene. The Studio Theatre of the Szentgyörgyi István Theatre Institute opened in October. Less than a month later, on November 10, on the stage of Platului Culturii, we have the premiere of If you are asked by Dorel Dorian, directed by Mihai Raicu a founding performance of the Romanian section at the State Theatre in Târgu Mureș. For sixty years, the theatrical space of Târgu Mureș has generated artistic attitudes, looking for both the particular and the exceptional, often reunited in the form of intercultural dialogue.

Teachers, students, artists, researchers, anthropologists, people in the cultural field and all those who think they can enter into a dialogue in relation to the proposed topic are invited to take part in the conference. We invite you to send the abstracts of the works (maximum 400 words) in Romanian, Hungarian, English or French, together with the institutional affiliation of the authors, by e-mail (in Microsoft Word compatible format), to conferinta.uat.2022@gmail.com and conference@uat.ro until October 23, 2022.

The conference will be held, in sections, in Romanian, Hungarian, English and French. The Scientific Committee will select the papers that will participate in the conference before November 10, 2022. Papers accepted through the peer-review system will be published in the Symbolon, an academic journal published by UArtPress under the auspices of the University of Arts in Tîrgu Mureș. The journal has been published in print (ISSN 1582-327X) and online (ISSN 2344-4460) since 2000. Symbolon journal publishes peer-reviewed reviews, articles, and studies that cover a variety of theatre and arts issues, film and media, music, encouraging multidisciplinary and interdisciplinary research. It is indexed in CEEOL, Index Copernicus, Google Scholar, ERIC + and classified in B category by CNCS. Instructions for authors are available online at: uartpress.ro/journals/index.php/symbolon/guidelins_for_authors.